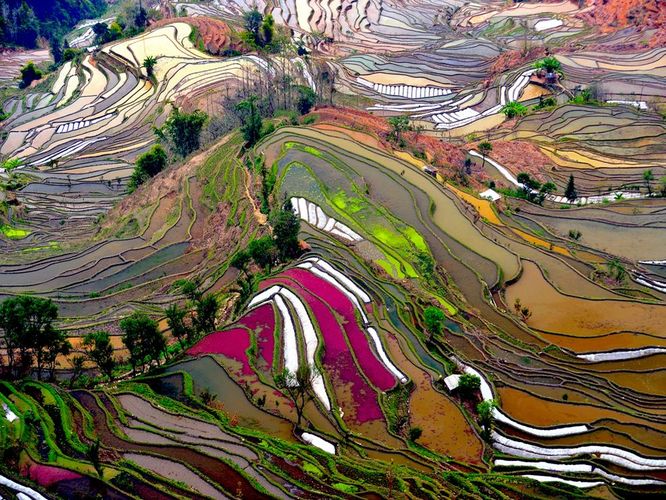 Stop for a while
Don’t do anything
Conversation
Browsing
Listening
Reading
Watching
Stuff
Stop stuffing yourself
Media
Food
Stop for a while
Sit down
Lie down
Stand down
Nothing special
In breath or in posture
Don’t do anything
It’s okay
Your back is got
Don’t wonder by whom
Or argue if it’s true
Or believe it so
Your back is got
How long is a while?
Awhile
Don’t put on the brakes
Trying to stop thinking
Think
Don’t think
Breathe
Don’t breathe
Relax
Don’t relax
Squirm
Resist
No control
For a while 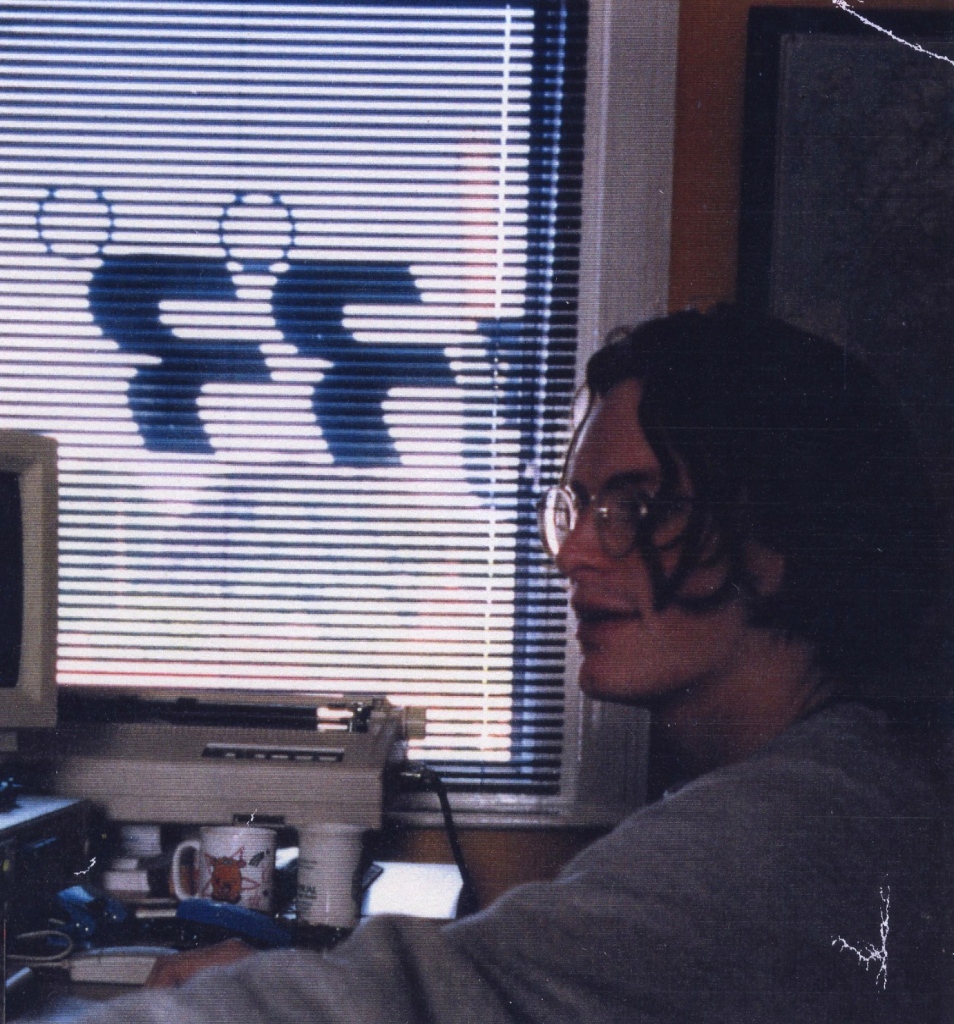 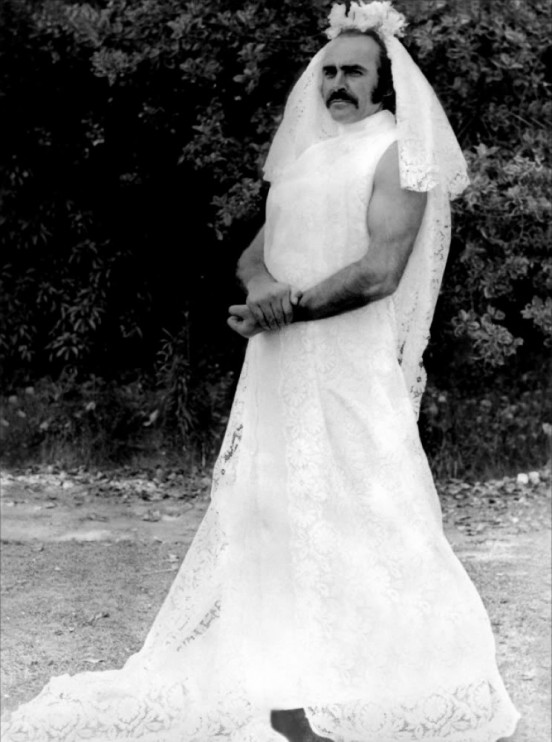 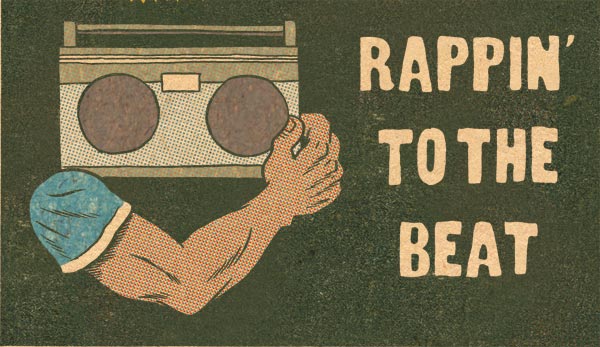 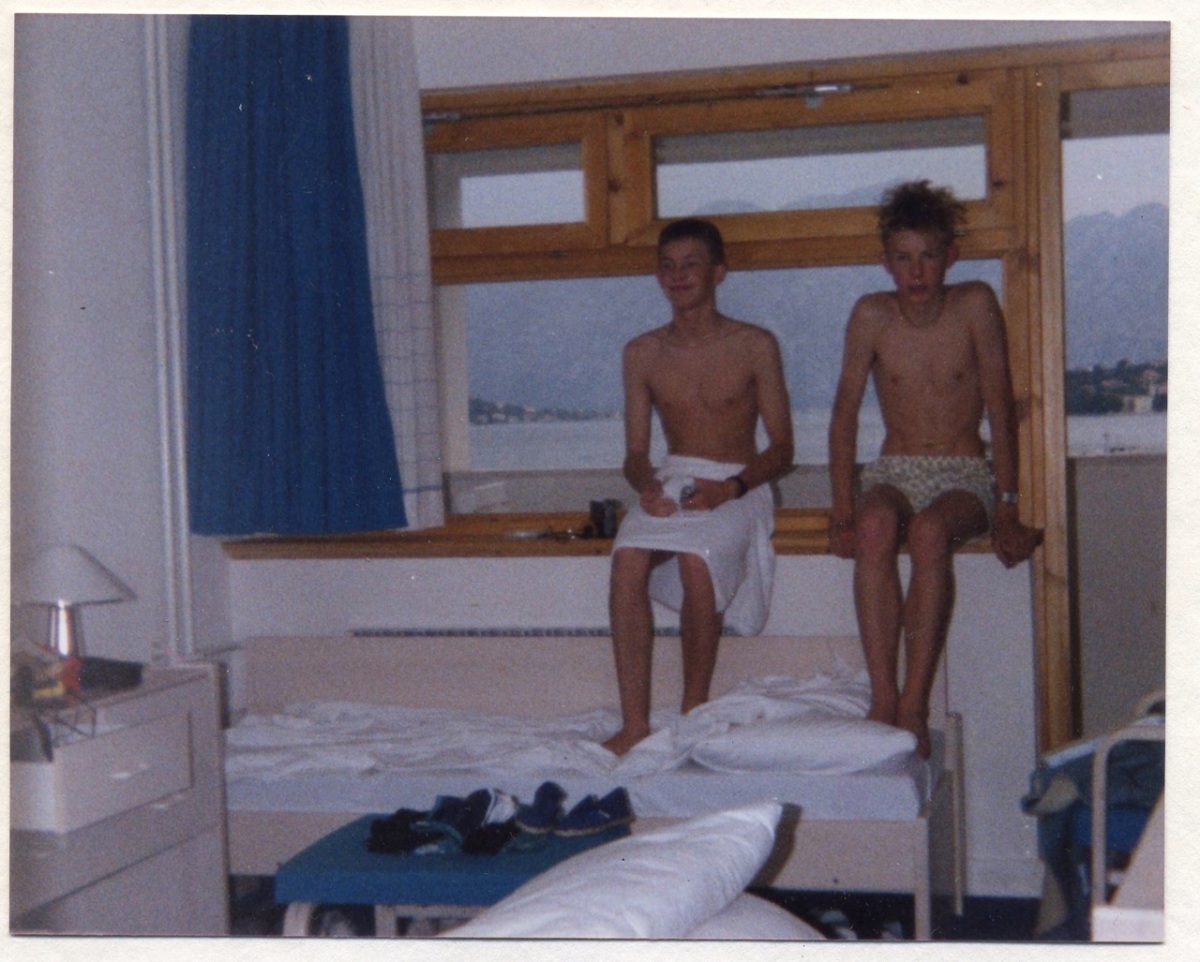 Here we are, Peter and I in what was Yugoslavia. No idea what’s going on, except that Peter is in full on The Cure mode. I spent most of the holiday listening to Licensed to Ill, reading 1984, and lusting after a leggy local girl. We had one terrible date, with an ex-pat acting as interpreter/chaperone. Bad idea. Otherwise the holiday was great, with the hotel at the head of a fjord – if you can have fjords outside of Scandinavia – where we swam and canoed and hiked. It was the first time I flew anyplace. Martin probably took the photo. 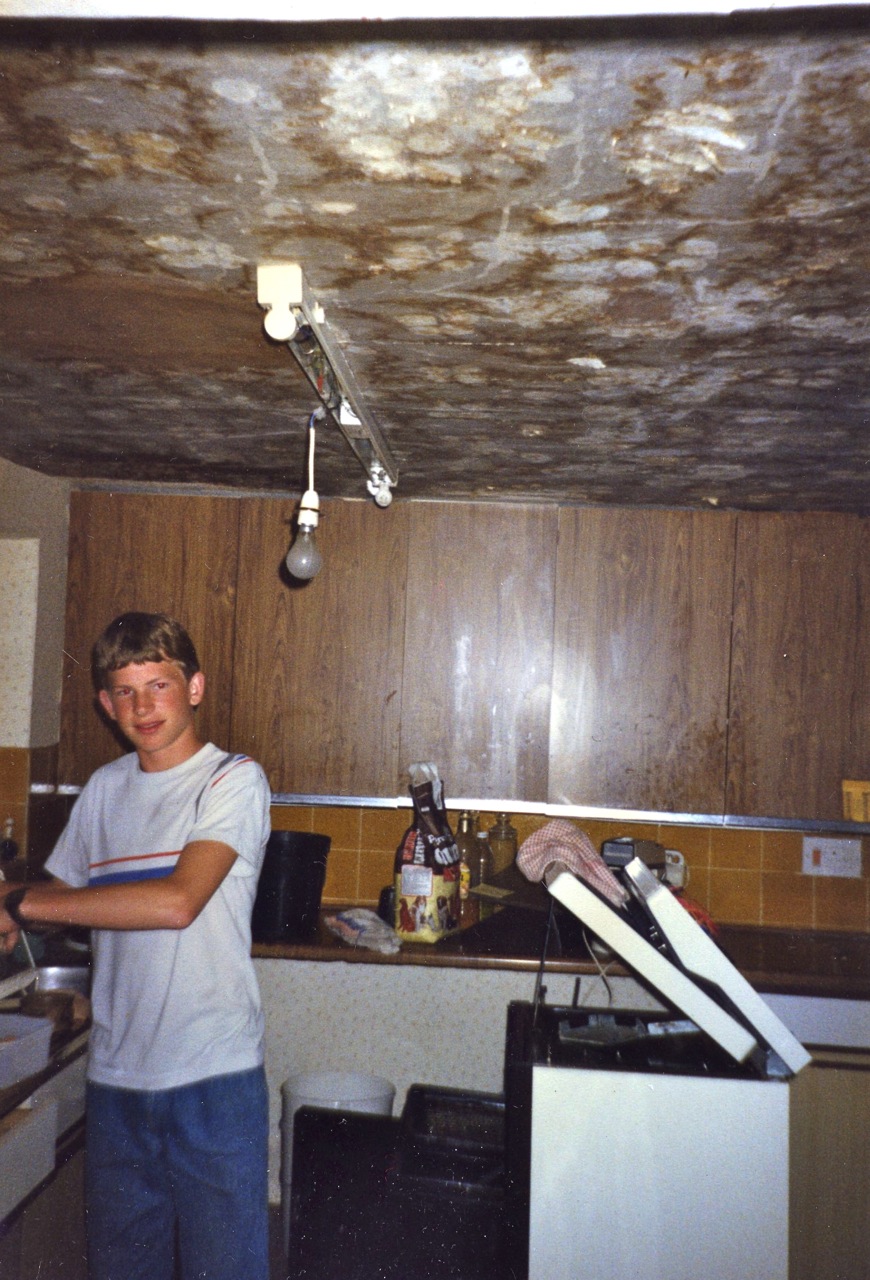 Here I am, aged 15, in our wrecked kitchen in Broughton Gifford. While camping in north Wales we were visited by a policeman who had tracked us down to our pre-mobile phone camping idyl to tell us that neighbours had reported water streaming down the outside of our house. Holiday aborted, we returned to a very sodden home. A pipe had burst in the attic. We dragged everything outside to dry and salvage what we could. Cue total refit for most rooms and the ill-advised allowing us to choose our own decor for bedrooms – diagonal red stripes, walls and carpet for me! 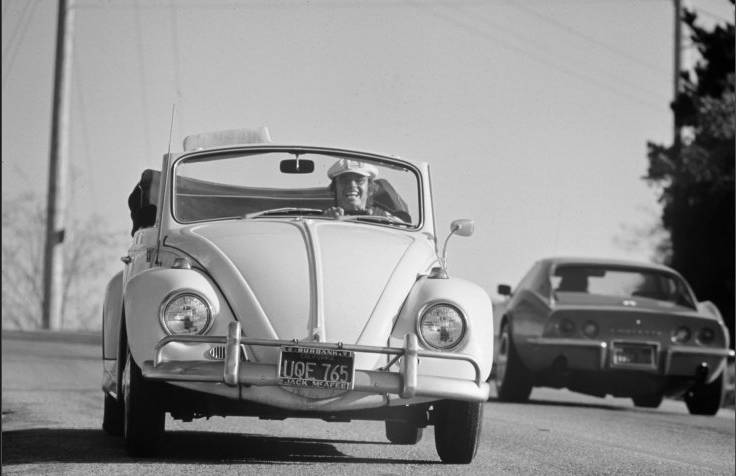 Here we are, Mum, Peter and I at Christmas. I don’t remember this in the slightest, nor our family being musical. Peter’s got his Arsenal scarf, I’m in jazz black and still with chicken pox scars. I probably thought I was in The Police, my favourite band at the time. 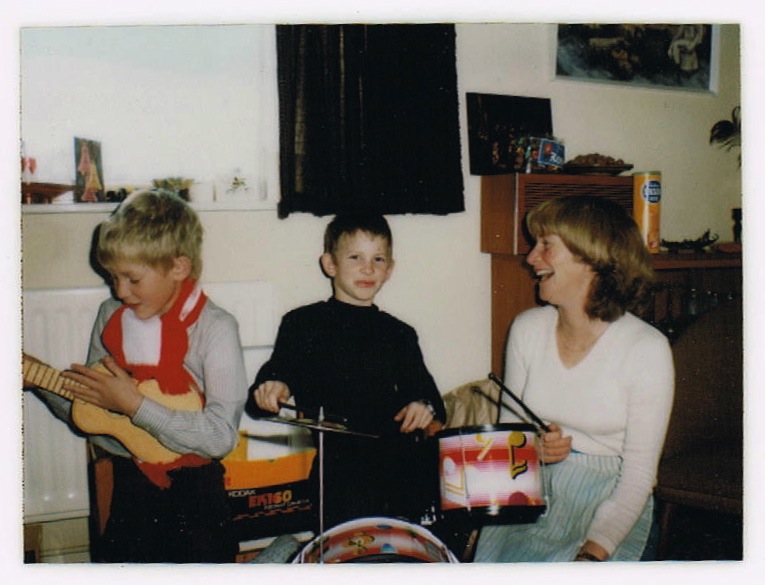 Here we are, Martin and I in Combe Martin north Devon on one of many family camping trips. This is a beautiful stretch of coast, from Ilfracombe along the north of Exmoor. This camp site had an amazing view but back then we were more interested in the rope swing in the woods, even fighting with other camping kids over it. Luckily big Philip Coward was with us to sort it out. I’m rocking the skinny 80s jeans and a Fred Perry, Martin’s rocking the biggest smile.

Here we are, Martin, Peter and I half-buried on a holiday beach. Gran and Grandpa Hunt, seated behind, may have had something to do with this! We had many good holidays, camping in our big orange tent, with grandparents staying nearby. 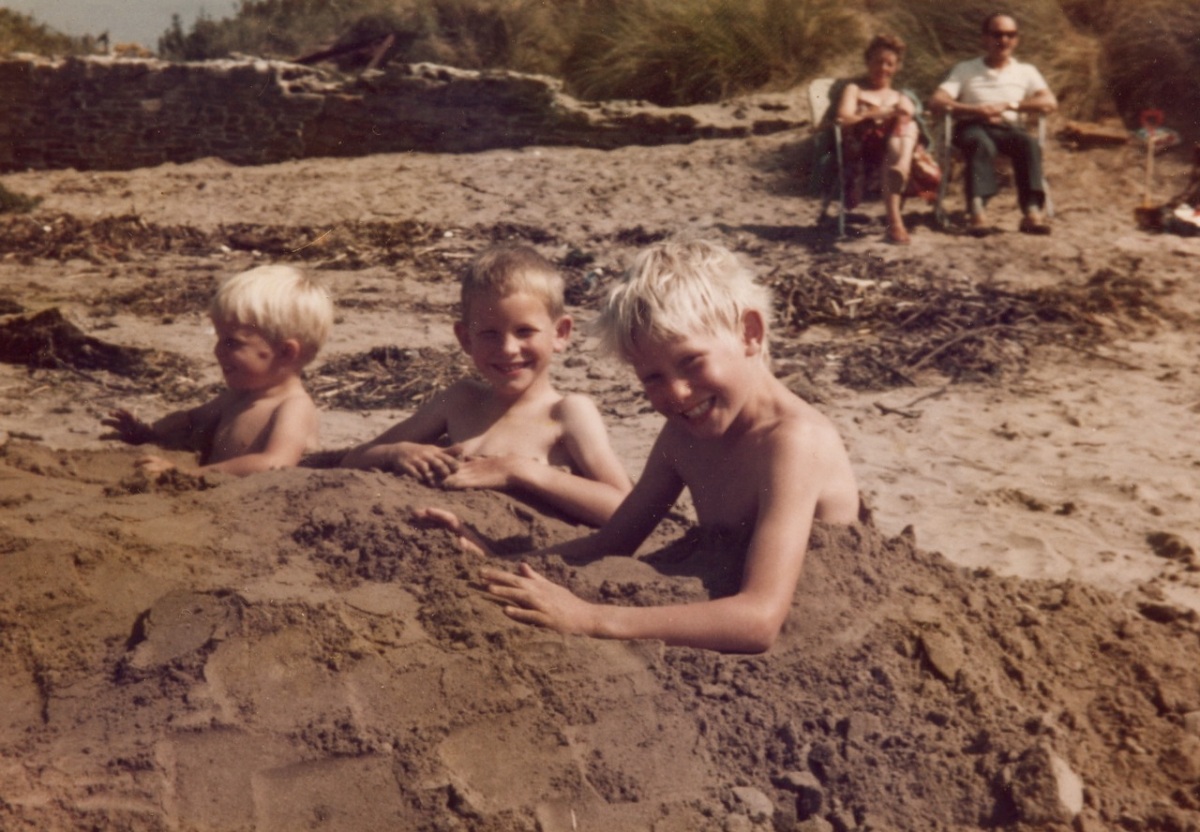 Here we are, Dad & I in the garden of Boundary House, Broughton Gifford. I’m three and a half. Dad must be just back from work, still in his brown suit and shiny shoes. Check out my red and blue combo with matching wellies! The dry stone walls were all rebuilt around this time and the large slabs were laid as a path through the vegetable garden. Back then our garden ended at the fence behind this wall, with cows or horses coming close to drink at the trough. Later we bought a diagonal slice of the field, extending the garden to the end of the hedge. In the background is the old pigsty and farm buildings we called The Camp. It was incredible! We fixed up the wooden shack and had great fun climbing the walls.

Update of photographs. The oak frames of all seven buildings are in place, with cladding on five pavilions. Look how green the trees are for late November 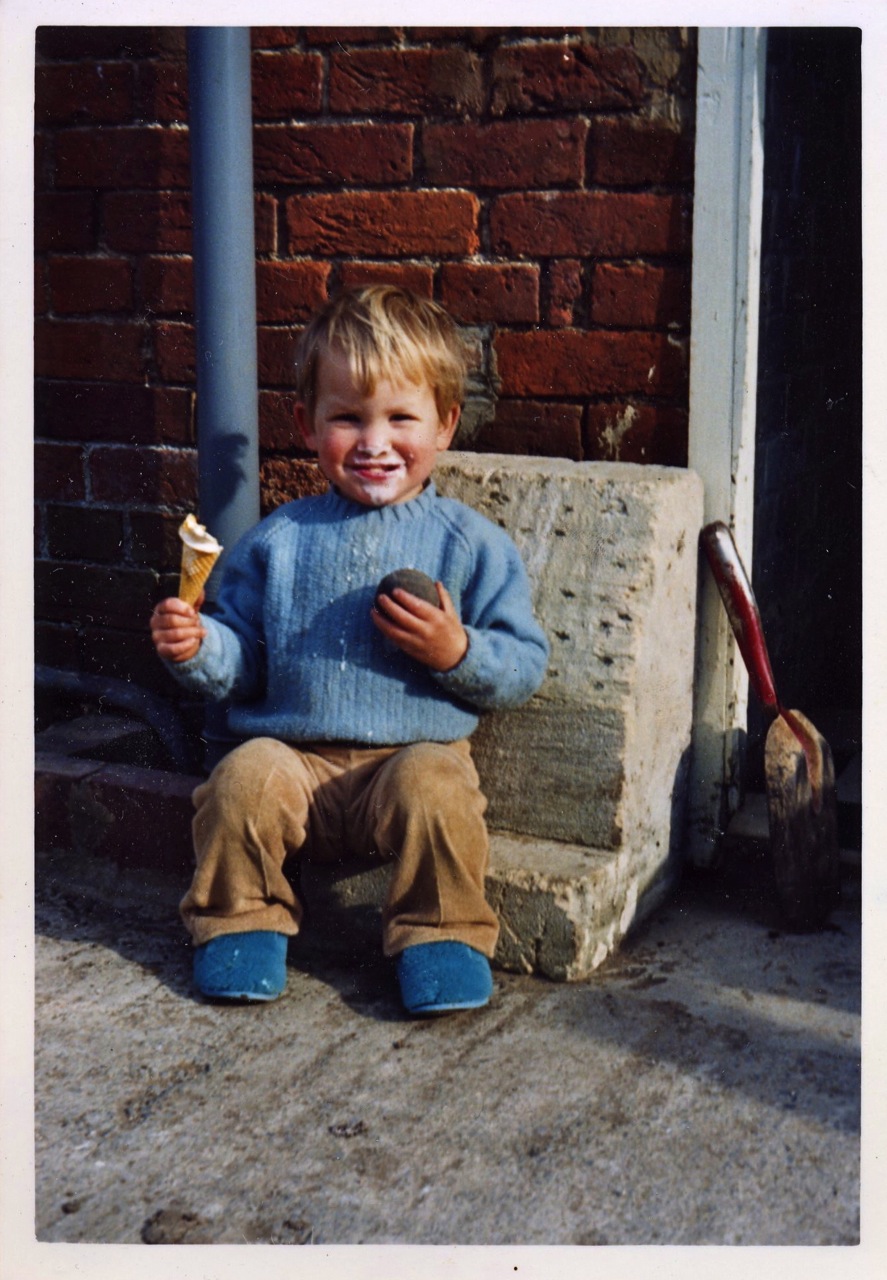 Here I am, age not very much, with my lovely mother, enjoying the good life. The photo was taken in Cheshunt where we lived till I was one and a half.

Here we are – Mum, Dad, Peter and Martin. I think this is the first picture I ever took, borrowing my Dad’s camera when I was about 6. We were on holiday in Devon, Martin aged 2 (would you say?) and Peter must be around 8.

In the 1960s, Dad in London with his first car, an Austin Mini. The original and best mini. Although, he did say it leaked like a good ‘un, from the bottom and top. Dad looks well chuffed! 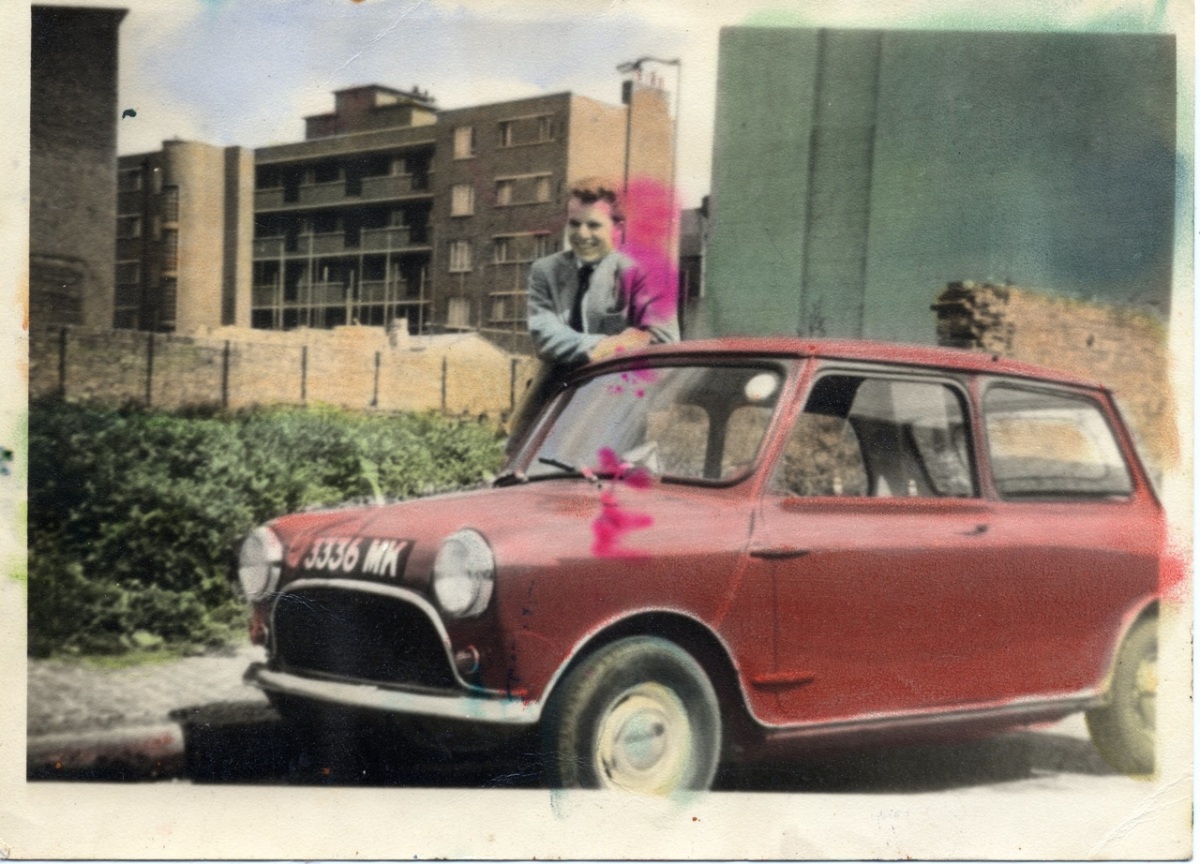 I was in London visiting my friends Tim & Nadya in south London. In the afternoon of 11 September 2001 I’d gone to Putney for a yoga class at the Sivananda Centre near the river. Browsing in the bookshop before the class I overheard the attendant and a customer talking about a plane having hit the World Trade Centre. I imagined they meant a light aircraft – some kind of mini-disaster of a solo pilot lost in the fog or something. It was time for class so I immersed myself in the Rishikesh Sequence for an hour an a half. On the bus back to Peckham Rye I didn’t hear anything more and had quite forgotten about the plane story. On return to my friends’ house they said have you heard? The twin towers have collapsed. What?? I looked at the TV and saw footage of a burning tower, my mind assuming it was a movie, despite what I had just been told. I was quickly updated with the whole story and we spent the rest of the afternoon and evening glued to the news channels, the pictures almost too vivid and explosive and destructive to be real life. Earlier footage of people jumping to their deaths from their burning offices was soon edited out of broadcasts, while the second explosion and the collapses were pretty much on repeat loop.

Here’s a photo from the day, with Tim in the foreground, Tygar behind the TV looking rather upset by it all, and the cat doing the admirable thing and snoozing on the warmth of the TV. 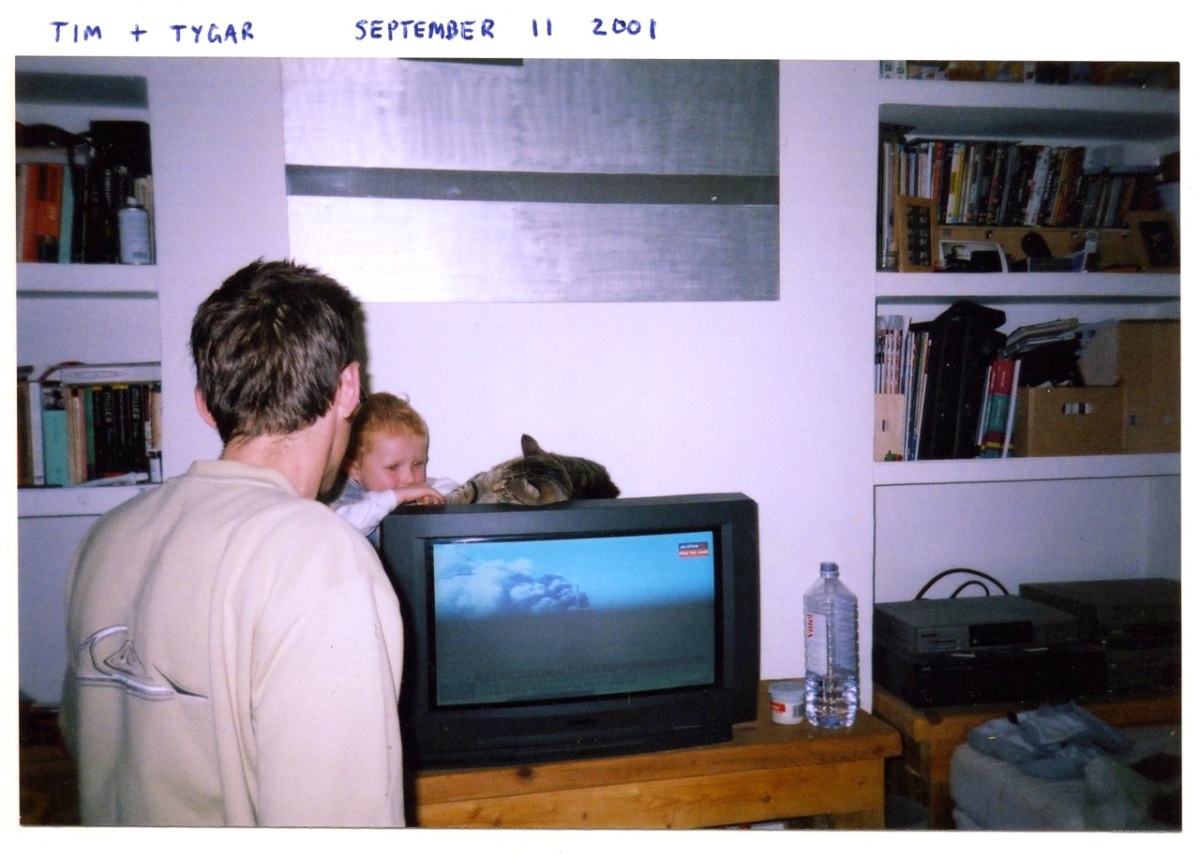