Lincoln Hall’s story is the most incredible I have come across in all the Everest reading and viewing I’ve been doing. At the end of the climbing season in 2006, this fifty year old Australian had reached the summit via the northern route, with three Sherpas. They had summited early in the day and had plenty of daylight and oxygen to get back to camp. But altitude sickness struck when Hall was still at 8600m. Suffering from the effects of cerebral edema, where the pressure inside the skull means fluid begins to leak into the brain, he began to hallucinate and collapsed several times. Each time he collapsed Hall believed he was taking a short break but they were long periods of unconsciousness. The Sherpas did their best to keep him moving through the day but he’d struggle with them and progress was very slow. Later Hall collapsed again and didn’t move. As the afternoon went on, the Sherpas continually tried to wake him and try to get him down to camp. All had been in the ‘Death Zone’ above 8000m for 19 hours, and supplemental oxygen had run out. They were all dehydrated and exhausted. Hall was declared dead at 5.20pm, and two hours later the Sherpas were ordered down to save themselves.

But Hall was not dead. He survived the night alone without water or shelter, drawing on yoga breathing and Buddhist meditation techniques, his consciousness tripping out in hallucinations. Luckily the temperature didn’t get below minus 25 that night – very cold, but not like it can be. He felt death as a grey cloak he was wearing, welcoming him. And so he determined to remove the cloak and face the cold. With dawn the sun warmed him somewhat and after 30 hours in the Death Zone he was found by another team heading for the summit. “I bet you are surprised to see me here,” were his first words. When they found Hall he was sitting cross legged and had removed his down jacket. He thought he was on a boat and wanted to get off – rather dangerous with a 3,000 meter drop in front!

The climbers abandoned their summit attempt and stayed with Hall until a rescue party could be organised and reached him. Still suffering from hypoxia Hall continued to battle with Sherpas on the way down, but he finally made it under his own power. Later he said Buddhism defines 8 stages of death, and he went through the first two. He doesn’t know what turned it around, nor can medical science explain why he didn’t die alone so high on the mountain. In an interview, Hall said:

The big thing I see is that what I had believed to be the nature of reality—the barrier between life and death, the dichotomy, I suppose—is actually not what I thought. And two things: the impossible can be possible, and death is not the grim reaper. It’s more welcoming. And it’s not like a trap, a welcoming trap. It’s actually just the next phase. I’ve been a card-carrying Buddhist for a dozen years now, and had Buddhist sympathies for a dozen years before that, but what happened this time around, on Everest, was that my appreciation of the Buddhist understanding of reality suddenly became real to me. That death isn’t the end, that it’s a cycle. So that’s the really potent life-changing message, even though I’m much the same person outwardly. 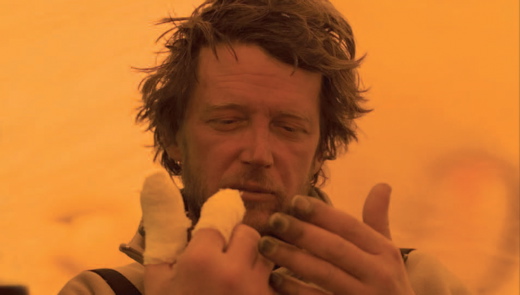