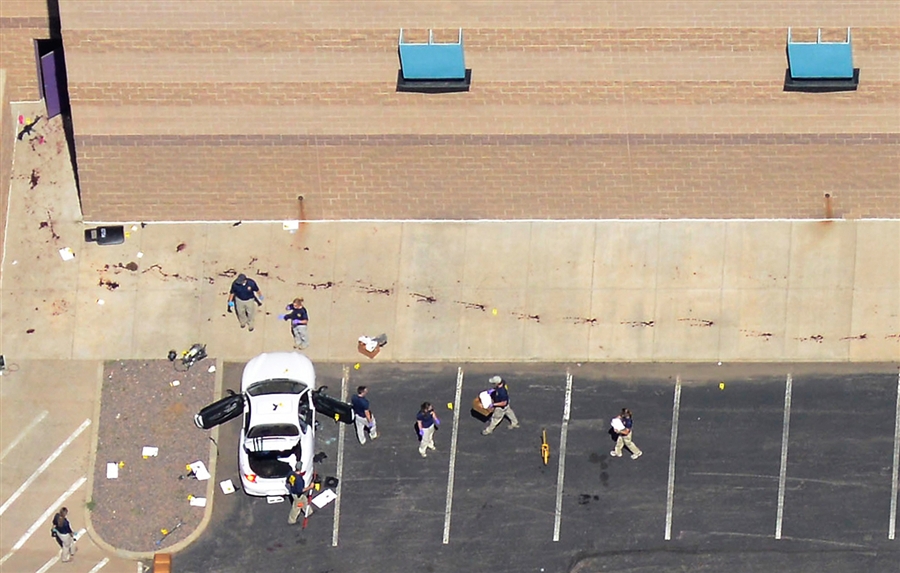 It’s somehow more comfortable for people to believe in uncomfortable conspiracy theory than to believe someone would, like, just do something like this. Especially when they can fit the theory to their already held beliefs.

The bodies in Aurora, Colorado weren’t even cold before the inevitable conspiracy theories began to propagate in the bacterial petri dish that is the internet.

While most people are content to let the investigation into the Dark Knight Rises murder spree evolve under the auspices of local and federal law enforcement, there exists a fringe for whom no amount of physical distance from, or baseless conjecture about, a national tragedy is too far to not support unlikely theories of United Nations false-flag attacks and other tinfoil cap speculations.

The current conspiracy du jour is that James Holmes’ attack on a packed audience watching a midnight screening of The Dark Knight Rises was in actuality an atrocity planned in advance by elements within the federal government and/or the United Nations. Those advocating this claim are pointing to several shaky bits of “evidence” that are in actuality nothing of the sort. This isn’t surprising, though: it costs practically nothing to make baseless accusations under the guise of “just asking questions”, and there’s much to be gained by doing so in terms of attention and notoriety. (Just ask Glenn Beck.)

Let’s take a look at some of the points being raised by those who believe that a government conspiracy was behind the Aurora shootings:

1) Everyone remembers James Holmes as a happy, normal fellow, so he couldn’t have done this unless he was coerced through mind control technology.
Disregarding the mind control/MK ULTRA talk, this is the hoariest cliche in crime reportage: “He was such a good neighbor…such a quiet fellow…you’d never think he’d do such a thing.” In actuality, Holmes’ schoolmates recall him as “strange” and “a little off.” He was in the process of withdrawing from his PhD program in the months before the shootings. There’s also some indication that a profile at Adult Friend Finder may have belonged to him. That’s no crime, of course, but the fact that his profile states “Will you visit me in prison?” might raise an eyebrow or two.

2) There’s no way this guy could have gotten all of those weapons and that tactical gear.
Not a chance. I’m nowhere near wealthy and I own three firearms myself, upon which I’ve spent about $600. I could easily acquire a shotgun and a rifle for maybe a couple thousand more if I look around town. That’s not even including the internet, where apparently Holmes did much of his own shopping. The gas mask? I own one, myself. Fully functional Russian surplus. Bought it for a Halloween costume. It’s also perfectly legal to buy a bullet-proof vest and you can do so at many places online or locally. Same thing with any other protective gear. As for the cost, all I can say is that none of us have access to his financial records, and if I were planning on spending the rest of my life in jail (or dead) then it would probably be pretty easy for me to liquidate my assets to acquire whatever I needed.

3) Someone must have trained him how to use it all!
Not necessary at all. I know how to strap on protective gear, and I bet you could do so, too. Firearm training? Also unnecessary. The audience members were sitting ducks. Many of them thought that Holmes was part of the show – after all, there were plenty of people wearing costumes. They had little reason to be alarmed until the bullets started flying. it takes little skill to shoot indiscriminately into a field full of targets. Pistols are another matter, but there have been many, many accounts of basically unskilled people using pistols to take many lives in other mass murders. The man killed a dozen people out of probably hundreds trapped in an enclosed space. It’s a tragedy, but this isn’t the work of a professional marksman.

4) Someone must have let him in!
Yes, that’s definitely possible: We think that he came in through the emergency exit, from what I understand. Someone might have agreed to do so thinking that he just wanted to sneak into the movie for free, or maybe someone left it open on accident. Perhaps Holmes himself had come in at some point prior and left it open. Or maybe he pried the door open from the other side. Who knows? Any of these seem likely – or at least likelier than a government agent opening the door and shoving Holmes in. All that we know is that he got in somehow.

5) He turned himself in! Who turns himself in?
You’re right: most of these guys off themselves. But not all of them! It does happen. Simply because Holmes didn’t take the extra step of killing himself doesn’t make him the Manchurian Candidate. Maybe he lacked the guts. Certainly, the fact that he left his apartment booby trapped seems to imply that he had originally planned on not coming back alive.

6) He timed his attack perfectly to coincide with the sound of gunshots!
It wouldn’t take an idiot to figure that one out, and if you’ve ever worked at a theater then you’ll know that you can easily hear the noises a movie makes when you’re standing near a door. Plus, it’s an action film about a terrorist villain. You could probably just walk in any time and have a pretty good chance of doing so during a gunfight or explosion.

7) They’re coming to take our guns! This is why they did it!
A major linchpin in the conspiracy theory is that this was done to justify the United States’ signing on to the United Nations Small Arms Resolution. From here, the theory goes, the powers that be will have all of the justification it needs to take America’s weapons away. There are a few problems with this. The first is that the UN Small Arms Resolution concerns the trafficking of conventional firearms between member countries, not the buy, sell or trade of firearms within member countries. The second is that no matter what the UN wants, the United States would still have to develop new legislature and pass it through the same process any other law goes through.

The FBI knew! The FBI knew!
There’s a video currently making the rounds that purports to show a FBI warning regarding potential terrorist attacks at movie theaters. The same video claims that the warning was removed from the internet around the same time of the shooting. The video – and thus, the document – has only one source, and it is being propagated through conspiracy circles at the speed of light. Presuming that one trusts the originator of the document that it is legitimate, then this in itself becomes highly problematic. Why would the FBI issue a warning of an attack in the first place if their brothers in arms are planning the same attack? Further, the document is clearly marked as a “Roll Call” release, one of a line of internal documents created by the Department of Homeland Security’s Interagency Threat Assessment and Coordination Group. My point is that they were clearly intended for internal use. If you’re part of a conspiracy, why alert everyone else? The document was never intended for public release, which might also explain why it “disappeared” after being posted. Finally, warnings about terrorist attacks in public places aren’t new. People have been talking about attacks in shopping centers and other public places for years.

9) The feds do this kind of thing all the time!
No, the feds don’t mass murder dozens of civilians all the time. They’ve set up plenty of sting operations with would-be terrorists (often with dummy explosives and that kind of thing), and they’ve even fouled up their share of investigations (“Fast and Furious”) and applied a jackhammer to situations that would require a feather touch (Waco) with horrific results, but coordinating the murder of a the theater full of suburbanites watching a comic book movie? No, that’s not something that typically falls under the purview of the federal government. You simply can’t look at past cases in which you suspect government malfeasance and use them as “proof” of malfeasance in this attack.

I suppose that nearly anything is possible, but which sounds like a more likely possibility: (1) A young man who most people remember as a bit of an oddball snaps and goes on a shooting rampage (something that has happened many, many times before); or (2) International conspirators band together in a coordinated assault on the residents of a Colorado town in a black operation to support the roll-out of  total gun control in America. I know where I stand. Do you?