Two days of excursions with the school. The first day contained an unusual and disturbing discovery that I will try to describe factually and with no names, out of respect for those involved. But rather than jumping to that incident I’ll proceed chronologically. Sometimes there’s need for an extra minibus driver, basically someone who passed their driving test before 199X, after which one had to take an additional test. Hard to believe I’ve been able to drive for 25 years. Most years I help with the Devon school camp in this way, but this year we were visiting places more locally instead.

Friday was to the Jurassic Coast in Dorset. After a two-hour drive, we parked at Lulworth Cove and climbed the steep wide path from the car park over towards Durdle Door, a path so trodden it’s been paved and almost looks like I imagine a Roman road to look. We were about eight staff and forty students. 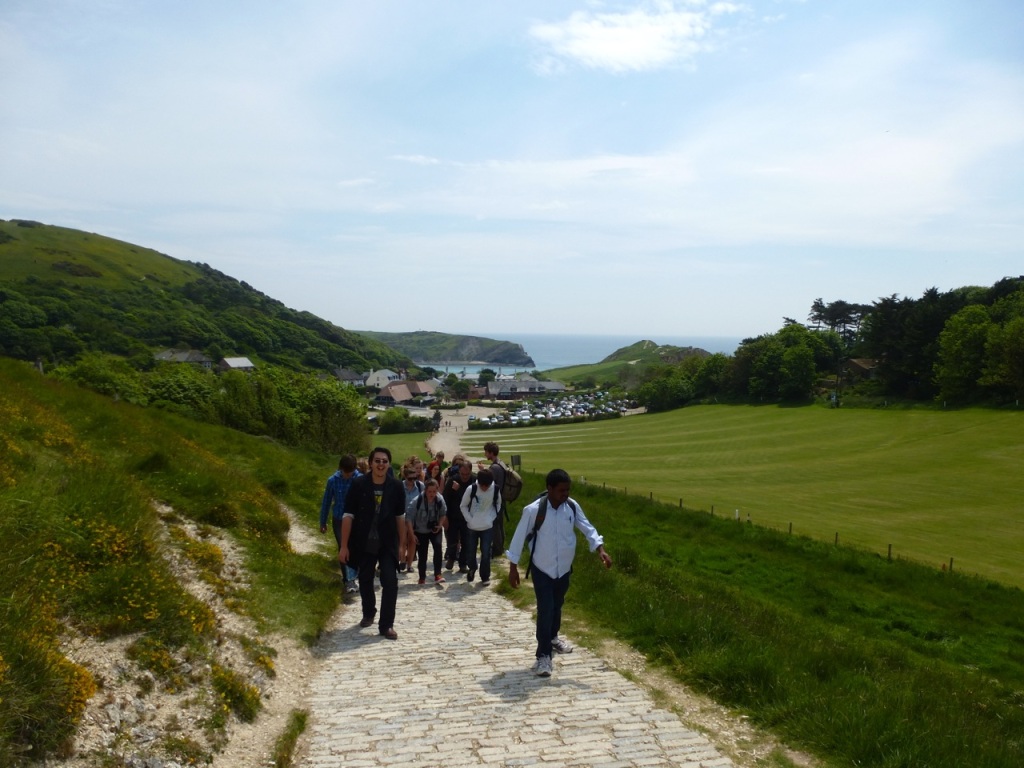 Up on Hambury Tout the view opened up to the west, over St Oswald’s Bay, Durdle door beach and beyond, white cliff for miles, such a stunning area.

Towards Durdle Door, the South West Coast Path was diverted away from the cliff edge, I suppose because of coastal erosion or just over-use of the path. Similarly, down to Durdle Door itself, the steps have crumbled away and we had to clamber down the earthen sort of steps that must be trecherous in the wet.

In the sunshine, the beaches and water here look so fine as to be Mediterranean or Caribbean or something:

At the famous arch of Durdle Door we stopped and had two hours to have lunch and enjoy the surroundings. For me it didn’t quite turn out like that. After lunch and some chat and some enforcement of the No Swimming rule (“Sharks in the water” seemed to help) I went for a wander along the kilometer-long beach. I passed student groups, a chalk rockfall halfway along, a couple sitting near The Blind Cow and then a last group of students out near another arch, the Bat’s Hole. These students soon headed back and I continued along, enjoying the cool water of the higher waves through my canvas shoes and picking up unusual stones along the way. I’m not sure why I went to the very very end, into the shade of Bat’s Head cliff, but I did. And there it was.

The dead body of a female, just above the shoreline. I couldn’t quite believe what I was seeing. Is it a mannequin, a dummy, a prop somehow washed up? I caught my breath and my senses and quickly started to understand what I was seeing, alone at the quiet end of a very well known beach. Still, it didn’t look quite real, a human body, devoid of any life, skin so pale from the water. Yet so very human still. She almost looked totally relaxed, lying there on the beach, some seaweed around arms and legs, a very horrible expression on her face. Then of course I had to report it but somehow, in my shock, I still wasn’t convinced of what I would be reporting, and to make sure, and I don’t really know why I did this, I hesitantly reached out and touched her hand with one finger. No, it is definitely not plastic.

Time to move! I had no phone, it being back with my bag and the other staff a km away, so I started to run. I soon reached the couple sat on the beach, but out of sight of what I’d found. I asked if they had a phone I could use. The said no. I didn’t believe them but explained to them what I’d found and said not to let anyone else go that way if they could. So I kept running, past a staff member walking back east. He didn’t have a phone either. Later he said I looked white as a sheet. Then ran past all the students who later said they thought my behaviour unusual for me, Duncan dashing about, something must be up. Finally, out of breath, my post-lunch stomach churning, I got my phone and the map so I could pinpoint the body. I moved away from everyone else and out of the wind to make the call. Luckily there was a signal. I couldn’t remember the non-urgent police number, nor did I know if it was an emergency or not, the body obviously being days-dead. So I dialled 999 and was put through to the police section, who put me through to the local police once I’d told of the find and location. They knew exactly where I was and asked me to wait at the entrance to the beach, at the bottom of the non-existant steps.

A man and woman had overheard parts of my call and checked if I was all right. I explained to them and asked them to keep the news quiet. Then I went back to some of our group, keeping one eye on anyone headed that way along the beach – not sure what I’d have done if they were – and another eye up on the cliff for the police arrival. A tight half an hour passed, only mentioning it to a couple of other staff members. I hoped that our two hours would be over and the group would leave before the police came. It turned out that the police came just as the group gathered to be counted and leave. I went up to the three three police to explain things who then swiftly set off. The asked if it was who had called. I would have liked to have just have had a minute or two with them to go through it – not that there was much to say, but just to cleanly hand it over to them – but of course they were keen to set off along the beach. “It’s pretty gruesome,” I managed to say. “Don’t worry, we’re used to this kind of thing,” came the over the shoulder walking reply.

Sparing our students any fright was impossible once they had seen me with the police. They are way too astute to lie to and way too curious for me to be able to keep silent, so I grimly explained what had happened. They were very supportive as we climbed back over the headland and it was good to repeat the story to those who asked. Some mentioned a missing person sign they’d seen up near the camp site, so I stopped and checked the sign on the way past, and it seemed the description of clothing and physique matched who I’d found. She’d been missing for over a week and her car left at the camp site since June 1st. A community support officer asked us to keep the news to ourselves. We passed three police vehicles and one of our staff thought he heard them closing the beach.

I’d have like to have headed home but there was still a trip ongoing, and I was the only one affected. They all stopped for ice cream back at Lulworth. I sat with friends, who recounted similar incidents, asking how I was, going back over things, head light, a little sick, and just letting it sink in as best I could while chat turned to other things. It was both a big deal and no longer anything tangible. At Lulworth Cove I sat quietly taking in the view, watching the others have some fun, although there mood was more subdued and most also seemed happy to just sit about on a sunny afternoon, at another very beautiful spot. Perhaps reflecting on mortality. I wanted to cry and was touched whenever someone reached out to me. One mature student was very matter of fact about it all, not coldly so. It must be because he is from India where this unfortunately isn’t such an unusual type of discovery. I was glad when it was time to leave and I could quietly drive one of the minibuses.

After two hours, back home, I was able to go into it some more deeply. I wept a little in C’s arms, for myself, for the woman, for her family, for the whole sad tale. Later I looked up the news reports. The missing person articles had been updated with the ‘body found on beach’ story and the unconfirmed police identification and brief police report. I suddenly felt absolutely shattered. Later, I slept deeply but on waking the gruesome images returned again and again. I didn’t push them away. After all of the pretend and real deaths on TV, film, in fiction, nothing really prepares for the real thing. Should death be used as stimulating entertainment, to perk up tired lives with stories of suicide, rape and murder? There’s enough of it in this troubled world and on this day some reached out and touched my quiet, rural life. Right now, two days later, I have no taste for death in the things I use for entertainment. My heart goes out to the family and friends, and I hope my discovery allows the grievance needed in them to put her to rest, the story to end.