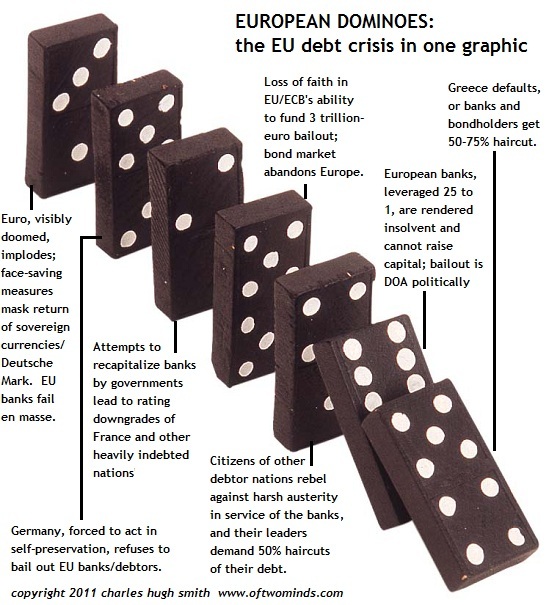 Simply put, there is no way the EU authorities can stop the first domino — Greek default or equivalent writedown of its impossible debt load — from toppling the over-leveraged banks which will be rendered insolvent when forced to recognize their losses.

That leaves each nation with the politically unsavory option of bailing out its premier banks with taxpayer money, and squeezing the money out of its citizenry via higher taxes and austerity. That assumption of bank debt will in turn trigger downgrades of heavily indebted sovereign nations such as France — moves that will raise rates and make the bailout even more costly to taxpayers, who will also be suffering from reductions of income due to global recession.

Once the banks and bondholders accept a 50%–75% writedown in Greek debt, then the other debtor nations will be justified in demanding the same writedown in their crushing debts. This dynamic leads to estimates that 3 trillion euros will be needed to bail all the players out. Alternatively, total losses will equal 3 trillion euros, wiping out banks and bondholders of sovereign debt.