A public day at the fair, but still not very busy at all. We had a good couple of meetings with existing publishers looking for new titles and were able to offer appropriate titles to their previous publications and interests. Time too for a game of Chinese battleships, with aeroplanes instead of ships. Our last day, since we have had all the meetings we need to, and Sunday is really only a public day and that type of contact is not why we are here. In the afternoon we said goodbye to The Cage, leaving out some literature for those who wanted some information in our absence.

I enjoyed working at the fair with Derek and Zhang Dan. The new contracts we initiated will increase the availability of Krishnamurti in Chinese, sales of which are already doing very well. A book fair is something I had never done before. Speaking of which…

Saturday evening I had been invited by a member of the Chinese Krishnamurti Committee to attend an event at their new venue, a café style meeting place in the north west of the city. At 1745 Zhang Dan and I set off from the Hilton for the subway station down the street. ZD has been helping us at the fair all week. She said that an email had gone to the committee mailing list announcing my attendance, and a charge of £2 was being made, which included a light buffet. I’d emailed before to say I wasn’t one for giving a formal talk and was told it would be a casual gathering. I wasn’t sure I’d be the ‘main attraction’ or what, but it seems I was. We arrived and mingled and I ate some melon and grapes, not quite trusting the other foods. I am sure it was clean and healthy but neither did my stomach want much food right then. I chatted with Fanfu, the organiser, and Sue, a translator, her bright daughter playing and running about, enjoying herself.

On wandering around I saw on a blackboard that there was a schedule and that there was to be a meeting at 1930. We all sat down, around 25 of us, and I was asked to introduce myself, and was then translated. Then a question and answer session commenced. I was a little nervous at first, but the normal fight or flight response – the highly charged nerves and wanting to flee – didn’t kick in. Luckily it wasn’t too hot in there and so I felt quite comfortable. All eyes were on me, apart from one guy who had obviously been dragged there by his girlfriend and spent the entirely time texting or looking at the floor. A range of questions in Chinese followed, Sue translating them, me answering as clearly as I could. The questions were about Brockwood, the Foundation, the Centre, Krishnamurti, his teachings, what they meant to me, why I worked there for such low pay. I tried to answer honestly and ‘deeply’, given the translation. I had to remember to stop after a few sentences to allow Sue to translate. People seemed very interested and extremely curious, in me and what I had to say. It was all rather surreal, but then most of the trip to China has been. 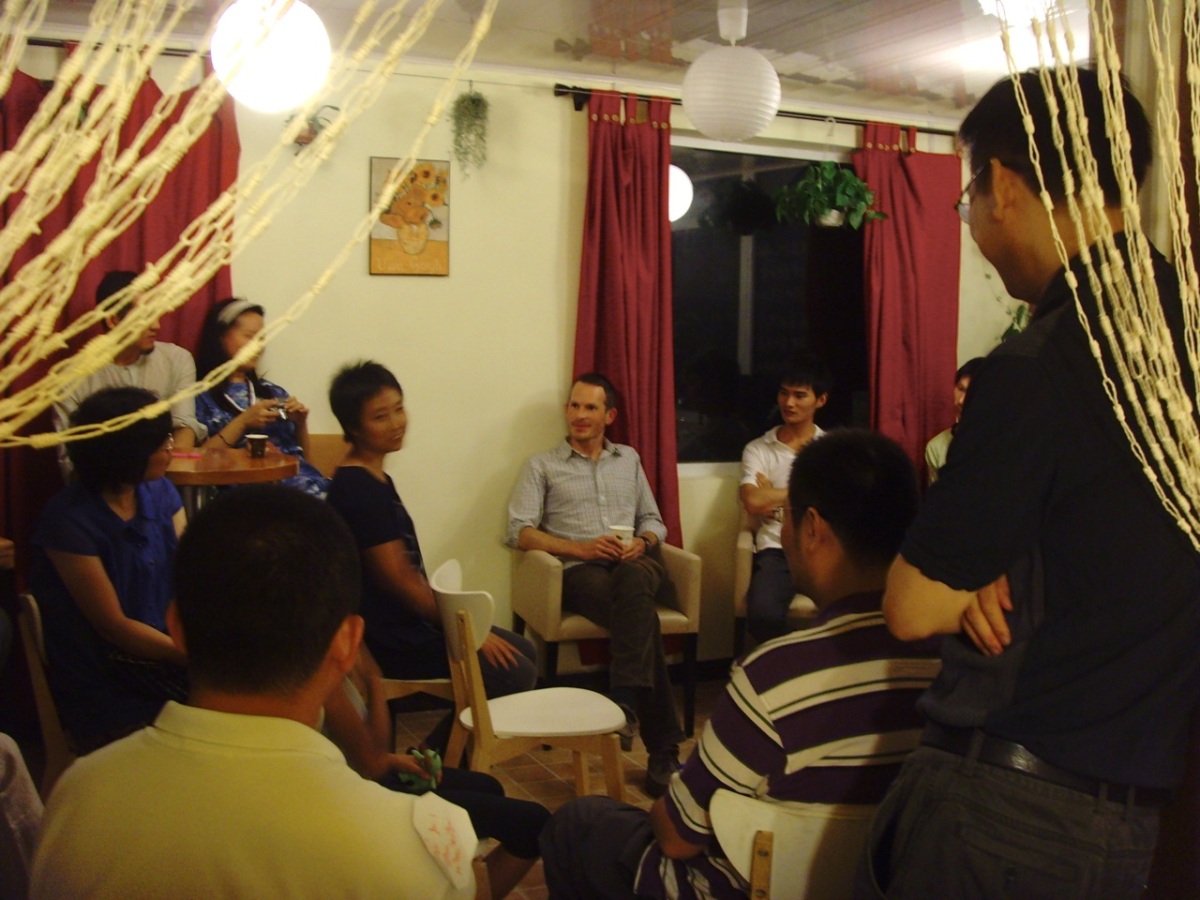 After answering a question about theme weekends at the Centre, one younger guy asked, ‘I have come a long way to be here tonight. Do you think your what you just said is important?’ Some objections came and discussion amongst a few ensued. When things had calmed down I said, ‘I am just giving answers to questions, and of course compared to the fundamental issues of life, this info isn’t important. But it’s easy to criticise. If you want to be serious, ask a serious question.’ He didn’t. Later he said there has been a total change for him. I said, ‘Good for you!’ It seems he is renowned as a bit of a stirrer and each time he said something there were ruffles of disagreement. As soon as the Q&A was over, he left the building.

Fanfu said he thought I answered ‘rather well’. I liked doing it. Despite all the eyes, I enjoyed myself and could have gone on longer than the hour and a quarter. I didn’t really expect the formal Q&A scenario. Another surreal moment when one lady’s question was, ‘You are very handsome!’ She’d been taking photos throughout. I made some ugly faces while everyone was laughing. Generally, I tried to take the emphasis away from trying to understand ‘Krishnamurti’s teachings’ to: What are your own reactions, and what is taking place within yourself, now and when you read or listen or watch?

So, my first experience of anything of that kind, apart from some casual tours of the foundation and the brief Q&A we did at one of the international committee meetings. It’s a good little place they have set up. Afterwards I chatted with a few who spoke better English. I felt I was experiencing a real community there, not only the people inside but entering the grubby street with men playing chess at the roadside and families and small apartments. Very different to the routine hotel to conference centre to restaurant to hotel, so far this trip.

The subway back was full of the Saturday night young. I am used to the looks and looks-away and looks by now, a tall Westerner in a carriage of Asians, all of us wondering quite what I’m doing there.