Awake in the night for a couple of hours. This has become normal for me now. Back to sleep around five, lapses into thought growing, reactions softening and body relaxing before oblivion returned.

Yet it wasn’t oblivion for long, dreams sparking up involving a festival I never quite made it to, now forgotten dramas along the way; my life but with the feel of a thousand films. So many films I’ve watched, in which the characters and me the viewer are sucked into a writer’s story, usually not fully resolved. So there they lie, these thousand stories, unresolved, unfinished business, to come out when there’s less for the brain to process day to day. But by now they’ve gotten twisted and a bit weird, mixed with the raw power of my own emotion and experience.

To bring light into this murky world of the dream. It’s never far away, ready to pull into a daydream, a thought fantasy, a random scenario unrelated to here and now.

And so a drifty dreamy hour’s sit, in my new corner the other side of the wall separating my new and old bedroom, facing a new direction: west. I don’t know how significant the way one faces is. I sat kneeling as my back didn’t like cross legged today. Although dreamy, there was a steady coming together of an initially scattered consciousness, bouncing around like tigger, with the fear of piglet. This boinging steadied about half way through.

Now I would like to sleep yet work starts in 30.

Spent much of the day writing out archives projects on our new list of todos for the charity as a whole. Steve and I talked a while about my unsettling experiences during the facilitating a couple of weeks ago. This was helpful. A respect is growing between us.

Lunch in the retreat centre with Steve, Roland who is back for a visit after five years, a hypnotherapist, and Louis who is back to guest help (volunteer). Roland and I had arranged to take a walk after work and we talked about his trauma therapy practice which is going very well and helping a lot of people, and also about our inner lives and explorations. This for an hour as the sun went down. At one point above West Meon the view suddenly opens up and we lingered as a soft mist formed in the valley. 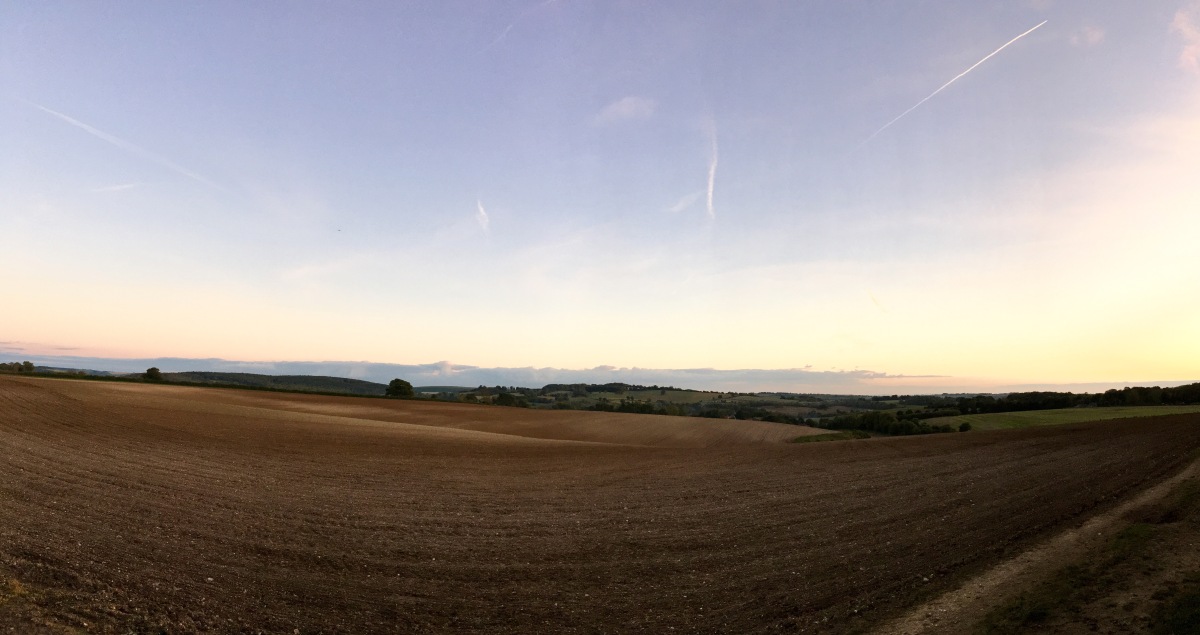 I enjoyed his easy, insightful company.

After a quick supper I unpacked some more, finding a place for everything in the kitchen, then as I got more tired, my clothes, now all neatly in the closet. It was fun for a while to have an actual dressing room but at the same time it was unnecessary and an odd place to be each morning. Again, too many mirrors. I much prefer this place.
Then bath time yes indeed. A gentle self massage all over as muscles unwound, focussing on those curious muscle tingley tickley fizzes as I relaxed. Self massage is so good. I haven’t done it enough, and it’s such a caring thing to do for the body that works so hard for us.

Earlier as we walked through the darkening wood towards the end of the walk, Roland said our bodies come from the earth, the ground, and ‘we’, our consciousness, just inhabits them a while. Visitors.